NYC vs Miami – What Do You Think?

HomeNYC vs Miami – What Do You Think? 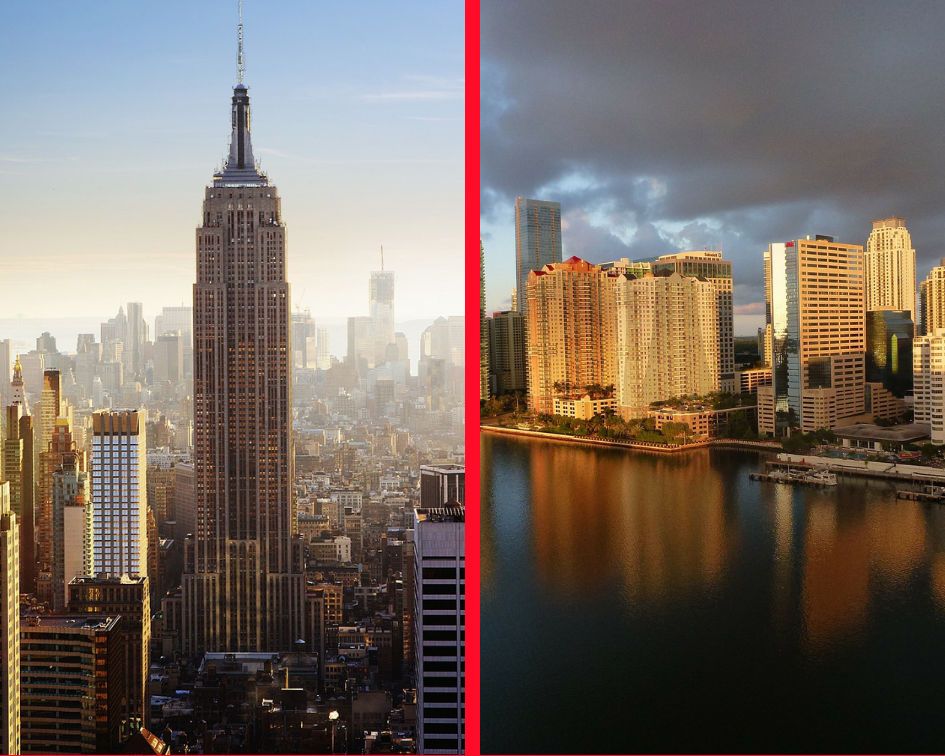 NYC vs Miami. Two major metropolitan areas on the east coast. Geographically close, but in most other senses they couldn’t be further apart. If you are in the midst of preparing to leave one for the other, there’s a huge lifestyle change coming to you. New York is often described as a busier and grittier counterpart to the laidback lifestyle treasured in Miami. As with most things in life, though, there isn’t a definitive answer to the question of where it is better to live, NYC or Miami. Both have their own advantages and disadvantages, and, at the end of the day, it boils down to what works best for you.

The climate – where is it better to live, NYC or Miami Beach?

Few people will actually move to a place exclusively for its climate, but it can have a bigger impact on our decision making than we’d maybe like to think. New York is typically a city of four seasons, which is extremely appealing to most people on paper. However, in reality, and taking global warming into account, the truth isn’t as pretty. New York is often struck by really harsh and long winters, as well as incredibly hot summers. The mild weather of spring and autumn ends up taking up very few days of the year.

On the other hand, lots of people try to eschew Miami because of its warm weather. Realistically, the heat does get pretty intense in the summer months, but it is so much more pleasant than other places during the rest of the year. If you can find a way to get away from the city during the heat wave months, Miami is an ideal home for you. The sheer number of sunny days is what often surprises relocated New Yorkers in the most pleasant way.

Winters are often rather harsh in New York City.

NYC vs Miami – Living to work vs working to live?

Life in New York is famously fast-paced, but this intensity of living is driven by ambition and working hard. People that come to live in New York are very career-oriented and put all their effort into ‘making it,’ whatever it means to them. Living in Miami as opposed to NYC is much more laidback. Enjoyment and pleasure are very high on the list of priorities for people living in Miami. Working is merely a way of financing your real life when you’re off the clock. If you are a very driven person and want to establish yourself in a particular industry, Miami is hardly the place for you.

Cost of living – how is living in Miami compared to living in New York?

For the most part, this category really tips the scales in Miami’s favor. Moving to Miami from NYC has unexpected financial perks. The overall costs of living are much lower than in New York, especially when it comes to real estate. It’s not just that properties are cheaper in Miami. You also get much more space for the same amount that would perhaps get you a cramped apartment in NYC. On that account, it should be noted that salaries are lower in Miami as well. However, life in Miami is still much more affordable even when you take that into account. This disparity is something one must bear in mind when moving to New York from Miami or really anywhere else in the country.

Both New York and Miami are known for their vibrant nightlife.

NYC vs Miami: Fun and culture

When it comes to the variety of experience and activities available, no other city in the world holds a candle to New York. Absence of choice in this regard is also among the main complaints people who have lived elsewhere have for Miami. It would be going too far as to say that Miami has nothing but sunbathing to offer. However, living in Miami is mostly good for a certain kind of activities and fits a certain personality type. If your idea of fun is clubbing until the small hours of the morning, Miami is perfect for you. Same goes for being active and spending a lot of time outside.

On the other hand, all these things can be done in New York as well. Not only that, but there are also numerous museums, theaters, and galleries primed to fulfill any cultural needs you may have. Swapping this cultural and artistic melting pot for a city that fits more of a one-track mind kind of person can be very underwhelming.

Unlike New York, Miami isn’t really a walkable city, which can be hard to get used to.

Another lifestyle change that might be worth mentioning is that Miami isn’t really a walkable city. You need to drive when going to most places, which can be a big adjustment coming from New York. Public transport and infrastructure are also not on the same level as they are in NYC. This is slowly changing, but for the time being, investing in a car would be a good idea. The city also requires more patience in general, which can be difficult to adjust to after relocation if you’re a New Yorker. Moving out of NY and starting over in FL can be simpler in many ways, though, especially compared to doing it the other way around.

Do you need some assistance after all? Florida moving companies like orangemover.com will make sure your move is effortless and you are eased into life in Miami.

NYC vs Miami – what do you think?

Articles giving reasons it’s better to live in Miami than New York and vice versa appear in abundance online. Although you can steep yourself in information, the final decision will depend on what your personal preferences are. Both cities have a lot to offer and it all boils down to what you hold in the highest regard. People looking for more stimulating career prospects will undoubtedly be more inclined towards NYC. Similarly, those looking to enjoy themselves more so than chase after ambitions are more likely to end up in Miami.