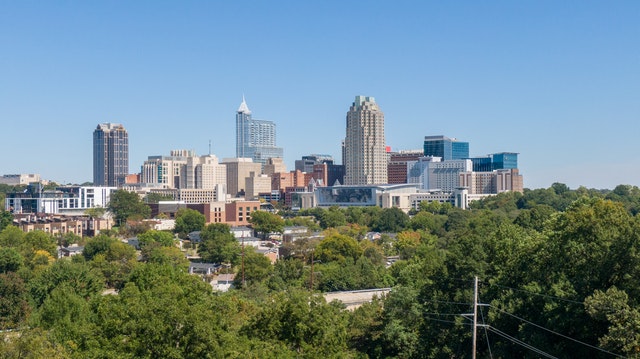 You can easily buy more… much more!

New York is becoming more expensive. This is one of the main reasons why people are leaving it and moving to places like Philadelphia, Raleigh, and Dallas. Sure, it might seem fun living in one of the most famous cities in the world, but once you’re there, you recognize how expensive life in NYC can get.

North Carolina is the opposite. The Standard of living in NC is pretty high, while prices and taxes are below the national average. Healthcare, groceries, housing, and transportation are all far less expensive to get than in NYC.

Adapting to having much more disposable income is one of the best things about Noth Carolina. If you keep the same income as you had in NYC, you’ll be able to buy much more or save more money, depending on what you’re looking for. Whatever, your choice is, one thing is certain – you won’t have to do two jobs like many people from NYC have to.

We guess that it would be easy for you to adapt to such circumstances!

North Carolina has a lot to offer! And we don’t say that lightly.

It is so easy to get from one part of NC to another. Even though North Carolina might seem big on a map, its transportation systems almost never experience traffic jams, so it is quite easy to explore everything the state has to offer.

By traveling through North Carolina you’ll experience many different areas with their own climates and wildlife. You’ll be able to visit and see many different cities, suburbs, villages, beaches, lakes, farmlands, forests, and so on. You can visit pretty much every different landscape and place you can think of, except for tundras and jungles. This is why our friends from nextstopmoversraleigh.com love moving people throughout North Carolina!

But, the diversity of North Carolina doesn’t end there. The state is becoming a melting pot of different ethnicities with their own cultures. This means that you’ll be able to experience every type of international activity and cuisine like you did in NYC, but for less money.

While there are pretty big cities like Charlotte, Raleigh, and Durham in North Caroline, they don’t really look like cities to people who come from NYC and other huge urban areas. This can even make some people homesick for NYC.

This blending of urban areas and suburbs with surrounding nature makes NC cities stand out from the rest. For people from large cities like Chicago, New York, or Orlando, this can come as a bit of a culture shock. There are not many skyscrapers in NC cities, and people’s homes tend to have very large backyards. While that can be a bit “unsettling” for some, it is quite easy to adapt and fall in love with such “urban” areas.

US roads are mainly designed into a grid, which makes navigation somewhat easier. New York City is like that. It is quite easy to get from one avenue or road to another.

While the centers of bigger NC cities are also grid-like, suburbs and other roads are often curvy. This can be a problem for people who adapted to grid road systems. When you are traveling on North Carolina roads, driving forward can often lead you to the starting location. This is why newcomers have to use maps or some kind of navigation system to move around.

North Carolina’s road network somewhat resembles European networks, and if you visited Europe, you’ll know what we are talking about. A lot of curvy roads can really mess things up for people who are used to driving on grids. So, grab a map, and explore the state so you can get a feeling of what is it like to drive in NC.

Also, it can be quite tricky to find your storage in North Carolina if you don’t know the area well. So, make sure to hire movers for that too, at least for the first trip to your storage unit.

North Carolina is big on sports

People from North Carolina love sports. They have The Carolina Panthers, The Hurricanes in NFL, and they also have Charlotte Hornets in NBA. Then you have things like minor league baseball, a ton of college football, basketball, etc. And this is only for sports fans.

Motorsports are also a big thing in North Carolina. They have a lot of NASCAR teams and more than a few races and events throughout the year. Surprisingly, some people list NASCAR as one of the main reasons why are they moving out of NYC to NC!

0
adjusting after relocationnyc lifestylerelocation tips
« Pro packing tips for a family move from Florida to New York
Leaving the West Coast for NYC: a survival kit »